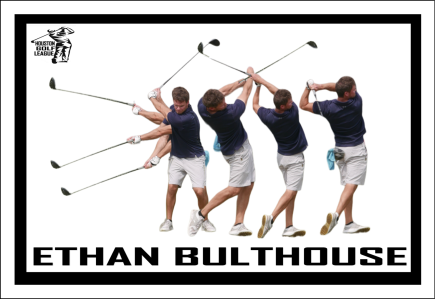 The Little Brothers are off to a flying start in their first year in the league. Detriek Little won the Masters in the B flight and now his younger brother, Steve, has won at Walden on the Lakes in Conroe last Sunday.
Generally, this course is quite difficult, yet, Steve was five under. It was the second-largest winning margin this year compared to Roland Turner's "runaway smashing"  by eight shots at Pearland in March.
Charles Richardson, a newbie, was the next closest player with an even-par.
That being said,  I'm left staring at a summation of facts that is inescapable, undeniable, and unavoidable. The Blue Team is dominating this year. A win in the Masters, both A and B flights, by Roland Turner and Detriek Little. There was a win in the PGA by Vincent Gilmore. The Blue Team had victories in three of the five regular tournaments with 69 points wins compared to the Red Team's 31 points.
The Red Team had one victory with a win by Haja in the season's opening in Pasadena. Dragging behind, we have 16 wins points for the White Team with a win by Mitch Moses at Southwyck. The Culture Cup is several months away, and our chances of winning our sixth title are closer to reality with these stats, so far, this year.
We are halfway through our second-round match-play events with four players moving into the elite eight. Vincent Gilmore, the number one ranked player, was battling Haja Rabe, the second-ranked player in the marque match. Both players struggled a little bit but Haja edged him out 3 and 1. Roland Turner won his match due to Lonnie Knowles quitting on the back. Ethan Bulthouse "manhandled" Juan Naranjo four and 3.
All the fireworks came from Casey Grimme and me. I was feeling confident that day. I was winning the match all through the front nine but the momentum changed as soon as we made the turn. I got a bit too confident, glanced up and Casey was up two holes with three holes left to play. I hated to do this to Casey since he's a such a good guy but I came here to play. For emergencies such as these, I carry a red cape in my bag. I put it on to win the last three holes in the match by one and I advanced to the elite eight.
Most of the remaining eight players will compete against each other in the U.S. Open at the Wilderness on June 26th. The deadline for the second round will be at Magnolia Creek on July 17th with the elite eight third-round starting July 24th at Wildcat in the British Open.
Now, let's get back to Steve Little's impressive showing at the Walden. This was truly inspiring. He and his brother will be a welcomed addition to the 2022 Culture Cup. The two brothers have a long way to go if they plan on catching the league's greatest duo of brothers, Lonnie and David Knowles. They have 14 career wins between them and a plethora of money won. So to the brothers, keep your head down and continue to grind. Congratulations, Steve, on your win.