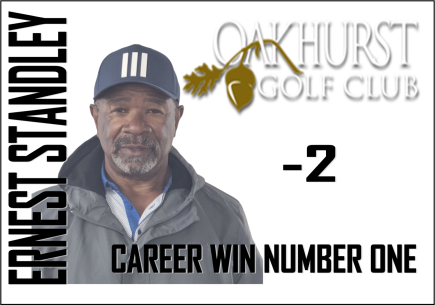 Now that the Handicaps are finely tuned, the last five tournaments ended in a scorecard playoff. There's a few old sayings that come to mind at times such as these..."every shot counts" and "fight to the finish." The tournament started strong with over a third of the field within 2 shots of each other. Roland Turner, Jaime Villareal, and Casey Grimme tied for 4th place with 2 shots back. Jaime and Casey had a pair of sevens on the back nine which kept them from winning. Roland Turner had his 7 on 16, undoubtingly, dashed his chances of winning his third tournament of the season. Detriek Little played well on the front and back with a 38 on both sides. This handed him a 3rd place finish. He overtook his brother, Steve, as the number one-ranked player in the B Flight.
Jarrod Ballou and Ernest Stanley led the tournament. Jarrod showed up flexing that this may be his tournament to win. Then it happened, he double 17 and bogey 18 to send this match to another scorecard playoff with Ernest. Ernest took full advantage of Ballou's costly misfortunes to achieve a first place win of his career with the league. At this point in the season, it's a close race for Player of the Year for both flights. Everything will be riding on the Players Championship in Coushatta on Nov. 12th and 13th.
Congratulations, Ernest, you are the 2022 champion of Oakhurst.