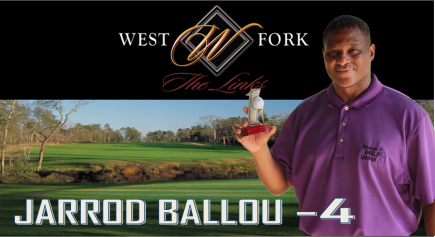 THESE GUYS ARE GOOD

I obsessively keep my eyes on the numbers and the results from each tournament. I am in awe of the talent that you guys show. I know that sounds cliche possibly from a PGA commercial but you guys are good. The league's net avg. score is 1.3 lower than last year's. Some of the veteran players like Ballou, Turner, Gilmore, Bulthouse, Villarreal, and Johnson are playing their best golf this year. Although, I have enjoyed watching the new talent from players such as Haja, Williams, Richardson, and Neitzey. They have been fun to watch.
Last week at the West Fork was a prime example of some great golf.  Jarrod Ballou elevated his game and took control of the tournament and won. Rookie, Casey Grimme, second-year player, Sean Hinton, and long-time veteran, Joe Hart, who was looking for his first win this season were all in a four-man tournament at the turn .
Let's start with Sean Hinton who has been hovering around the top of the leaderboard in several tournaments this season. He won last year's Players Champions at Coushatta Pines and had a perfect record in the Culture Cup but he has struggled closing out the tournament this year. He lost three shots on the closing two holes,17 and 18, which cost him the tournament. This earned him a moneyless, fourth-place finish.
Jarrod, Joe, and Casey played their butts off. All of them finished four under the whole tournament. It came down to one hole, number 17. Dun, dun, dun!! Joe and Casey missed the green and failed to get up and down. Jarrod fired it right in the heart of the green and two-putted. He walked away with his 9th career win. He joined the pack of players banging on the door of the Hall of Fame.
They're all clawing at Villarreal's feet and he can't hold that spot much longer. It will be interesting to see what happens in the Player Championship. This will be the last chance to enter the Hall this year. This is some good stuff. You guys are good!  Congratulations on your well-deserved win, Jarrod Ballou!