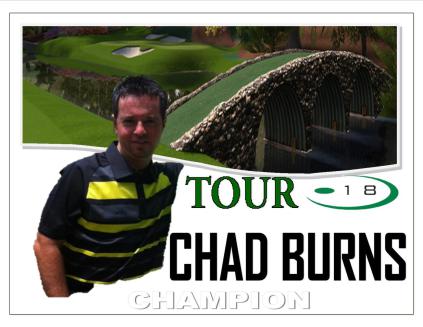 THE NEW KIDS ON THE BLOCK

Chad Burns gets his first win in the Houston Golf League and joins the plethora of first-time winners this year. Chad makes the fifth latest player this year to win. As the league evolves with the influx of new blood my old players who have not won in awhile like Gabe Ramos, Lonnie Knowles, and even the Great Jaime Villarreal the first and only Player to make the HGL Hall of Fame have not stepped in the winner circle this year. Gabe won the two-man Best Ball back in January and Lonnie and Jaime have finished second but no wins for the veterans. This scenario again mirrors the PGA  players like Phil, Tiger and Ernie have to give way to Jordan, Fowler, and Mcllroy. Which one of my old school players can reach into their bag of tricks to pull some magic? I know father time is under undefeated, but I got a strange feeling that all three will be walking in the winner circle this year before it's all said and done. Chad got his first victory without a fight from anybody else his 40 going out was best on the back and good enough to hold on the lead by 4 shots. He played the Amen Corner, the Blue Monster, Sawgrass and The Disney hole 1 over par. Pretty good score on those tuff holes and that is why you are the 2018 champion at Tour 18 congratulation chad on a job well done. 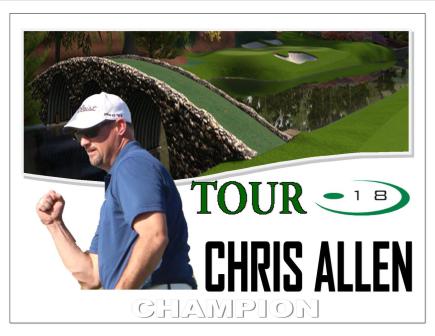 Chris Allen had just lost the prior tournament to Steve Sachs as the rain-shortened Cypress Lakes by one shot. He was hell-bent on not letting that happen this week at Tour 18. This tournament came down to 4 players going into one of the hardest finishing holes in all of golf. The Blue Monster at Doral the famous 18th hole is traditionally ranked as one of the most difficult on the PGA TOUR. It is no surprise that virtually every great name in golf has had a moment of personal triumph on this world-class course (Jack Nicklaus won twice, Greg Norman three times and Tiger Woods four), nor is it any surprise that it has been host to the PGA TOUR for 55 consecutive years. You must keep the tee shot to the right side of the fairway, then hit an approach to the right side of the green. Even the right rough is not a bad option off the tee, but then you’ll likely need to lay up short of the green to keep from risking a pull-hook into the lake that lurks just off the edge. It’s tempting to bail out into one of the bunkers right of the green, but beware, a sand shot with the water staring at you from across the slick green is no bargain. So first up to be eaten alive by the Blue Monster, Houston Duckwall. Was fresh off a birdie on 17 tied for the lead but jumped under his bed on the tee box on 18 when to hear a thump in the night with a triple bogey to finish in 4th place. The next two to face the Monster was an old and new rival of Chris Allen, Jayme Gonzales, and Steve Sachs. Jayme and Chris both entered the League at the same time and have been battling each other for years each winning about the same against each other. Steve, on the other hand, has been a thorn in Chris' side. And going into 18 they were both one shot up but they both bogeyed 18 and Chris had a great par on the Monster to put them in a 3-way tie for first place. Chris would win in a scorecard playoff giving him his 4th career win in the league. Congratulation Chris, continue to believe in yourself cause we do not give out participation trophies or money.